50 Years ago on July 16, 1969, two men step onto the moon. It took hundreds of people from various backgrounds to make it happen.  It took courage to believe that it was possible and even greater courage to ask others to follow.  Today, you see companies like SpaceX and billionaires like Amazon’s Jeff Bezos dreaming, planning, funding, and working towards commercializing space travel. Working to create a way for non-astronauts to experience space travel.

For me the anniversary is particularly special. No I’m not old enough to witnessed it but my past did afford me an opportunity to work at NASA for a short period of time.  Back then I was studying Computer Engineering and Electrical Engineering, with an emphasis on Software Engineering at Purdue University.

My time was at the NASA Lewis Research Center in the Cleveland, Ohio. Today, it is known as NASA Glenn Research Center at Lewis. It was officially renamed in 1999. As a black female from the inner city, I sometimes could not believe that I got to go to NASA everyday, even for the short time I was there.  It was an amazing experience being around and learning from the team that worked on the solar panels and backup batteries for the space station. My time there led to me being referred to as “the rocket scientist” by some members of my family. Nice, but inaccurate.

On Saturday, July 20, 2019 at 10:38 pm EDT, NASA rebroadcasted the original Apollo 11 moonwalk. There are many tributes, articles, photo and video galleries celebrating the event. They also released Panoramas of the Apollo Landing.  Take a Look, that are stunning!

As a more "how things work" and data geek, I found the article in Forbes Magazine, that discussed the businesses that took that giant leap right along NASA fascinating.  In Apollo 11's 50th Anniversary: The Facts and Figures Behind the $152 Billion Moon Landing there are insightful videos, graphics and details about the behind-the-scenes work.

All-in-all it was a weekend filled with nostalgia and awe at what was accomplished 50 years ago. For more information, go to: nasa.gov.

FUN FACT: Purdue University is known as the "Cradle of Astronauts" 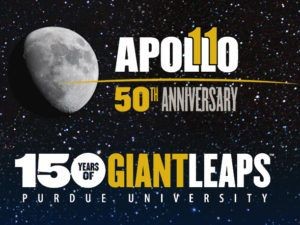 Purdue University graduate and Apollo 11 flight commander Neil Armstrong became the first person to step foot on the moon on July 20, 1969. It was a truly giant leap for mankind, and a seminal moment in human history.

Known as the "cradle of astronauts," Purdue is proud to commemorate the 50th anniversary of the moon landing with a series of events designed to celebrate this landmark occasion and those who made it possible. We will honor the Apollo 11 anniversary as we recognize an anniversary of our own — 150 years as a land-grant university — by celebrating the giant leaps taken and footprints left by Boilermakers across the country, around the world and beyond.

Our calling is simple: Whatever your endeavor, take giant leaps.