ADJUSTED HOURS:
During this time, we are temporarily suspending in-person meetings.
To keep in contact with our clients, we are holding meetings via FreeConferenceCall.com or Zoom.us.
help@danicoenterprises.com
(847) 241-4227

​What is International Women's Day?

March 8th is International Women's Day (IWD), a global day celebrating the achievements of women.  The first reported gathering was in 1911.  IWD is recognized everywhere, it is not country, group or organization specific.

The 2019 campaign is about balancing gender equality, #BalanceforBetter. "A balanced world is a better world."

For more information about International Women's Day and how you can be involved, go to: internationalwomensday.com.

​How are we recognizing the day?

As a women-led technology based company, we thought today would be appropriate to celebrate Grace Murray Hopper, a United States Naval Officer and Mathematician and pioneer of computer programming who invented one of the first compiler related tools.  She's been credited with creating programming language, Cobol (​co​mmon ​b​usiness-oriented language). 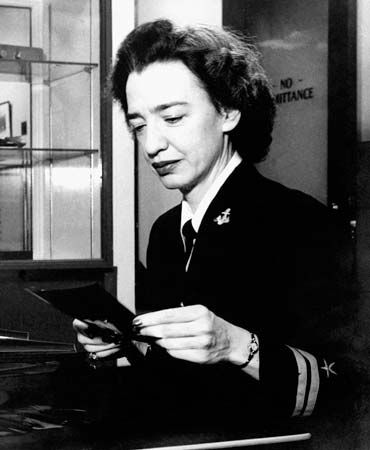 She was also instrumental in the creation of the Mark I, the precursor to electronic computer as well as coining the term "bug" after a moth found its way into the Mark I circuitry.  Mrs. Hopper retired from the Navy at the age of 79 and in 2016 was honored with the Presidential Medal of Freedom posthumously by then President Barack Obama.

"In 1991, President George Bush awarded Hopper the National Medal of Technology "for her pioneering accomplishments in the development of computer programming languages that simplified computer technology and opened the door to a significantly larger universe of users;" she was the first woman to receive the nation's highest technology award as an individual." and during her acceptance speech she said, "If you ask me what accomplishment I'm most proud of, the answer would be all the young people I've trained over the years; that's more important than writing the first compiler."

I saw the ​60 Minutes​ interview from 1983 where she commented when asked if the computer revolution was over, that "we're only just beginning". I didn't realize it then but later reflecting on my educational choices and career path direction, seeing this woman achieve so many things - things in a male-dominated arena, helped me not be afraid.  I am grateful to women such as Mrs. Grace Murray Hopper for all that she contributed to the world and for showing what women can do.

Were/Are you influenced by a women in your field?  We'd like here from you in the comments below.
Tweet